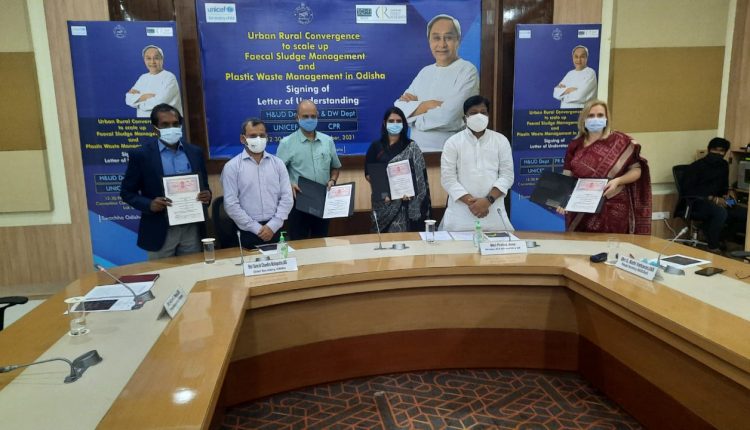 Bhubaneswar :  A Letter of Understanding (LoU) was signed between the departments of Housing and Urban Development (H&UD) and the Panchayati Raj and Drinking Water (PR&DW), UNICEF and Centre for Policy Research (CPR) today for urban-rural convergence on Faecal Sludgeand Septage Management (FSM) and Plastic Waste Management (PWM). This unique initiative aims to strengthen the efforts of both departments to ensure district-wide sanitation through urban-rural convergence for FSM and PWM services in seven districts in the first phase. The initiative is being launched in Angul, Balasore,Dhenkanal, Ganjam, Khurda, Mayurbhanj and Sambalpur which will be scaled up to all districts in the State subsequently.
Gracing the occasion Shri Pratap Jena, Minister PR&DW , Law and H&UD, said that this intervention is a step towards fulfilling Hon’ble Chief Minister Shri Naveen Patnaik’s vision of building “Swachh Odisha and Sustha Odisha.”Hailing Odisha as a champion State in FSM and Solid Waste Management (SWM) for its efforts in implementing decentralised waste management across 114 Urban Local Bodies (ULBs), Minister Shri Jena said that with this step, the rural population will also be able to avail sanitation facilities located in the nearby urban areas.
Further , the Gram Panchayats will now be tagged to Urban facilities like Faecal Sludge Treatment Plant (FSTPs) and Material Recovery Facilities (MRFs) for effective faecal sludge and plastic wastemanagement. This initiative will strengthen both Panchayatiraj Institutions (PRIs) and ULBs to ensure prevention of river and ground water pollution and environmental protection through a district wide sanitation approach, the Minister informed.
Giving the keynote address, Shri S. C. Mahapatra, Chief Secretary, Govt. of Odisha, said that the State has made substantial progress in both FSM and SWM in the recent years.Terming the initiative as a unique feat, he said that the convergence will help in providing better sanitation facilities to rural population and result in optimum utilisation of urban infrastructures . 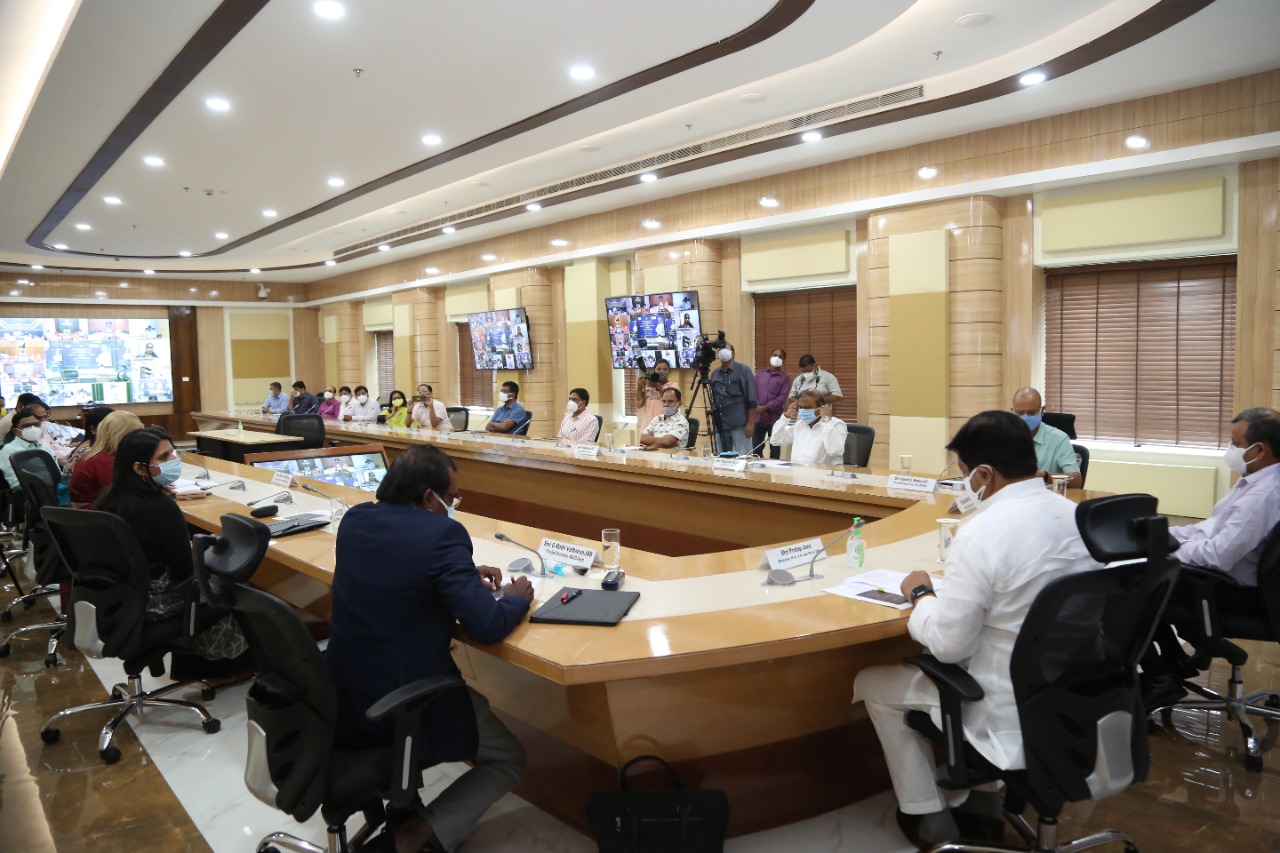 The State Government has already operationalised 58 FSTPs and by March 2022, all the 114 ULBs will be covered with 118 functional plants, said Shri Mahapatra.Furthermore, Wealth Centres (WCs) have been established in each ULB comprising both Micro Compost Centres (MCCs) and Material Recovery Facilities (MRFs) for management of Solid waste including the Plastic waste. At present, 167 MRFs are functioning in the State through Mission Shakti SHGs, he added.

Shri G. Mathi Vathanan, Principal Secretary, H&UD articulated the uniqueness of the urban-ruralconvergence model and said that it will further strengthen Odisha’sexemplary efforts in faecalsludgeand plastic waste management. This approach will greatly help in promotionof public health by combating pollution of water bodies and land. He informed that the initiative being piloted in 7 districts now soon be extended to all the 30 districts within a year.

The H&UD Department in a communication in May has directed all the districts to ensure urban rural convergence and leverage on the FSM and plastic waste management facilities located in adjacent urban areas.

Appreciating the collaboration, Shri Ashok Kumar Meena, Principal Secretary, PR&DW said that the urban-rural convergence will not only help in achieving ODF sustainability but also in the effective management of faecal and plastic waste in the entire State. Odisha has adopted various innovative models in transforming the sanitation landscape and this is another novel initiative to serve rural areas by connecting with urban facilities,he added. The Department has already notified Odisha Rural Sanitation Policy in 2020 which underscores adoption of safe and scientific management of solid waste with a special focus on plastic waste and liquid waste management, he informed.

Ms. Yamini Aiyer, President,CPR and Ms. Monika Nielsen, Chief Field Officer, UNICEF Odisha, expressed that this partnership would strive to formalise urban-rural convergence on FSM and PWM besides aligning to the national (SwachhBharat Mission) and international agenda ( Sustainable Development Goal- 6) on improved sanitation for all and expressed hope that this model would emerge as a best practice for the entire country to learn and emulate.
Collectors, PD-DRDA,PD-DUDA, Commissioners/EOs, BDOs and other key officials from the 7 Districts participated through Video conferencing.

Shri Sangramjit Nayak, Director, Municipal Administration (DMA) and Mission Director (SBM-U) H&UDD, thanked the dignitaries present and sought the support of all the key stakeholders in the districts, ULBs and PRIs on this pathbreaking initiative which is a first-of-its-kind initiative in the Country.