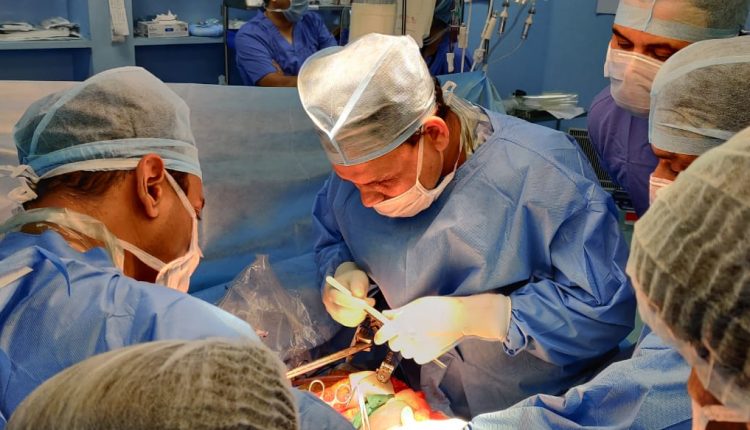 Bhubaneswar: Registering a first in Odisha’s medical history, the Institute of Medical Sciences and SUM Hospital, faculty of medical sciences of the SOA Deemed to be University, on Thursday successfully conducted a living donor liver transplantation.

A team comprising surgical experts from the Hyderabad-based Yashoda Hospital and IMS and SUM Hospital conducted the arduous nine-hour long surgery on the donor and the recipient.
The path breaking surgeries were conducted on 55-year-old Jayanta Biswal, a resident of Nilagiri in Balasore district, and his young son Saumya Ranjan Biswal, a B.Com student, who donated a portion of his liver. Both the father and son were doing fine after the marathon surgery which began at 3 pm and was completed at midnight. Both of them were presently kept
under observation in the ICU.

Biswal had been suffering from non-alcoholic fatty liver and it was decided to conduct the transplantation to save his life.
Prof. (Dr.) P.Balachandran Menon, Chief Liver Transplant surgeon from Yashoda Hospital assisted by Dr. G.V.Prem Kumar, Director, Anaesthesia and Intensive Care, Dr. Krishna Chaitanya, transplant surgeon, Dr. Manoj Kumar Sahu and Dr. Premananda Pattnaik, Gastroenterologist and Gastro-intestinal surgeon respectively of IMS and SUM Hospital, led the team during the surgery.

IMS and SUM Hospital had signed a MoU with Yashoda Hospital one and half years ago for the purpose and preparations were on since then for undertaking liver transplantation in SUM Hospital after getting due approval from the statutory authorities of the state to conduct both live and cadaveric transplantation, Prof. Pusparaj Samantasinhar, Medical Superintendent of IMS and SUM Hospital, said adding the SOA management completely backed the initiative by facilitating all requirements.

Gastro-intestinal surgeons, anesthetists, nurses and paramedics from IMS and SUM Hospital had visited Yashoda Hospital repeatedly for training over the last one year, he said. A large team had been created by IMS and SUM Hospital by inducting experts from various departments of the hospital including Gastro-intestinal surgery, Cardiology, Critical Care, Anesthesia, Nephrology, Urology, Cardio Thoracic and Vascular Surgery, Hematology Lab, Path Lab, Blood Bank and Nursing. Members of the Bio-medical, Dietics and Central Sterile and  Supply Department were also included in the team. “There was total and united effort from all concerned to make the transplantation successful and everyone played their role exceptionally well,” Prof. Samantasinhar said. “Cirrhosis of liver is the end stage liver disease with an invariably progressive course.

The number of patients suffering from cirrhosis of liver is on the rise in Odisha mainly because of the change in peoples’ lifestyle,” Dr. Sahu said adding the prohibitive cost of such surgery also stood in the way of patients availing the facility elsewhere. Dr. Sahu described the transplantation as a milestone in Odisha’s medical history. Both Yashoda Hospital and IMS and SUM Hospital had joined hands to enable patients in Odisha to have liver transplantation here at an affordable cost, he said.
“This first such procedure conducted in IMS and SUM Hospital has been done free of cost including pre and immediate post-transplant care. Liver transplantation offers an excellent
treatment option for such patients. Such transplant surgeries cost anything between Rs. 20 to 25 lakh in other hospitals but it can be done at Rs. 10 lakh in SUM Hospital,” he said.

Anita Biswal, wife of Jayanta, was effusive in her praise for the hospital saying her family would remain indebted to SOA President Prof. Manojranjan Nayak for the institution’s gesture.
Mr. Santosh Kumar Sahoo, Senior General Manager of Yashoda Hospital, said those requiring liver transplantation should register themselves with SUM Hospital so that they could become candidates for cadaveric transplantation whenever the opportunity arose. “We are willing to collaborate with IMS and SUM Hospital for different organ transplantation,” he said.