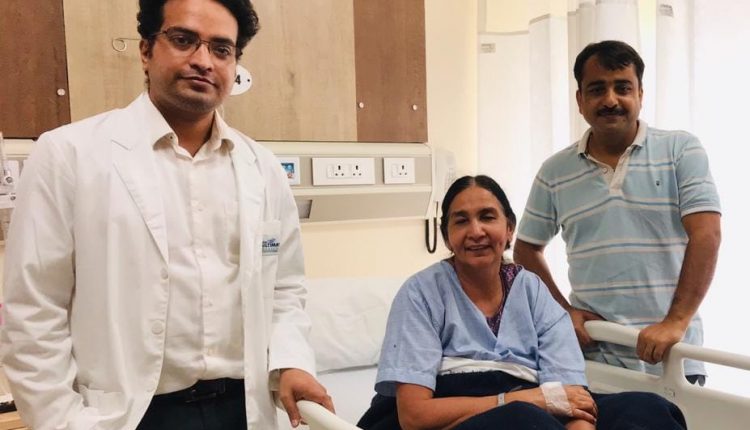 Bhubaneswar: An expert in skull base surgery at the SUM Ultimate Medicare here has successfully conducted a minimal invasive procedure on an elderly woman suffering from a tumor in her cranial base causing acute headache and loss of vision.

Dr. Radhamadhab Sahu, Head of ENT and Skull Base Surgery in the hospital, conducted the Trans Nasal Endoscopic Skull Base surgery on the patient Ms. PrabhaTiwari who had developed the tumor in her cranial base extending up to middle cranial fossa with involvement of optic nerve.

The patient’s son, Dr. Devi Prasad Tiwari, an urologist who had done his MCh from AIIMS, New Delhi, had travelled nearly 1000 km by road with his mother from Samastipur in Bihar to get the surgery done at SUM Ultimate Medicare after he had scanned the list of experts and facilities at the pan India level. After the surgery, the patient improved fast and was discharged from the
hospital after three days, Dr. Sahu said.

One of the few trained skull base surgeons and pioneers in the field, Dr. Sahu heads the Centre of Excellence for cranial base surgery at SUM Ultimate Medicare. He has been doing similar procedures regularly which includes Endoscopic approach to pertous apex plasmacytoma, a rare and challenging minimal invasive brain surgery done recently through the trans nasal route.

Among the most equipped quaternary care hospital in the eastern region, SUM Ultimate Medicare has emerged as the new face of medical tourism.