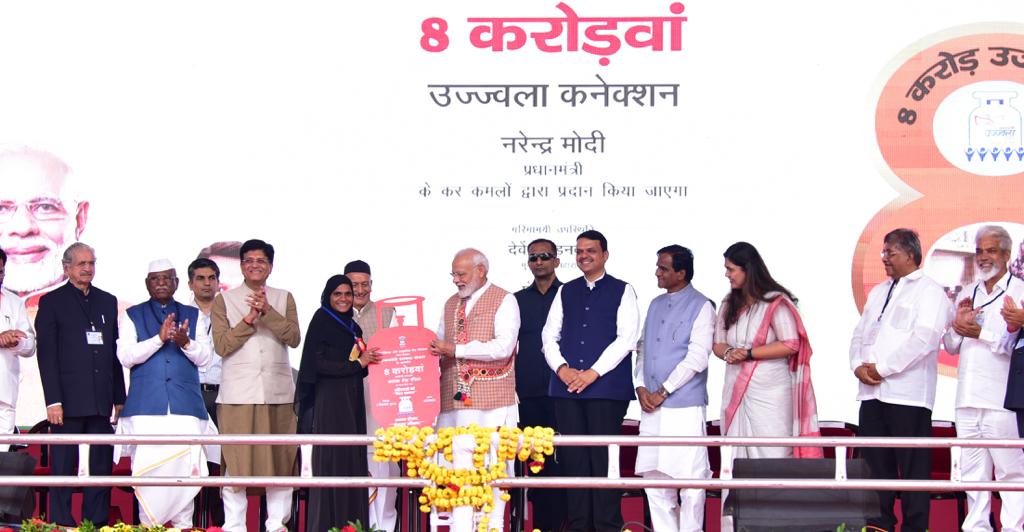 Aurangabad: Hon’ble Prime Minister Shri Narendra Modi here today handed over 8 Croreth LPG connection under Pradhan Mantri Ujjwala Yojana (PMUY) to Smt. Ayesha Sheikh Rafique of Aurangabad. Present on the occasion were Shri. Bhagat Singh Koshiyari Governor of Maharashtra, Shri Devendra Fadnavis Chief Minister of Maharashtra, Shri. Piyush Goyal Union Minister of Railways & Commerce, Shri Raosaheb Danve Union Minister of State for Consumer Affairs, Food & Public Distribution, Shri. Haribhau Bagade, Speaker, Maharashtra Legislative Assembly, Shri Subhash Desai Minister for Industries and Mining, Government of Maharashtra, Smt. Pankaja Munde Minister for Rural Development, Women & Child Development, Government of Maharashtra, Shri Eknath Shinde Minister for PWD, Public Health and Family Welfare, Government Of Maharashtra, Shri. Dadaji Bhuse, Minister of State for Rural Development, Government of Maharashtra, Smt. Vidya Thakur Minister of State for Women and Child Development, Food and Civil Supplies and Consumer Protection and other dignitaries. Hon’ble Prime Minister Shri Narendra Modi appreciated the collective efforts of the Ministry of Petroleum & Natural Gas and the Public Sector Oil Marketing Companies in achieving the target of 8 crore seven months before the deadline set for them. Describing it as a momentous occasion, he said that PMUY endeavours to fulfil the dream of the Father of the Nation Mahatma Gandhi to benefit the poorest of the poor and work towards an inclusive development blueprint. Prime Minster said that PMUY meets all the objectives of ‘Reform, Perform and Transform’. In the first fifty years since the LPG came to the country, only 13 crore connections were provided, while in the last 60 months 14 Crore LPG connections have been provided by OMCs, under the aegis of the Ministry of Petroleum & Natural Gas. The LPG penetration in the country has jumped from 55% in 2014 to over 96% now and almost 86% beneficiaries under the PMUY have been refilling the cylinders. In order to provide clean cooking fuel to BPL households in the country, the Government launched “Pradhan Mantri Ujjwala Yojana” (PMUY) scheme on May1, 2016 to provide 5 Crore deposit-free LPG connections to women belonging to the Below Poverty Line (BPL) families. The target was subsequently increased to 8 Crore with a budgetary allocation of Rs. 12,800 Crore. Universal PMUY now covers release of LPG connections under Pradhan Mantri Ujjwala Yojana (PMUY) to all poor. The initial target of 5 crore connections was achieved well before the timeline of 31st March, 2019. Implementation of PMUY has resulted in significant increase in national LPG coverage, with mass coverage of rural poor households, of which 46% of the beneficiaries are SC/STs. Over 78% beneficiaries under the scheme, who could not afford to make upfront payment for purchase of gas stove and first refill, were provided loan facility by the OMCs. It is significant to mention that for FY 2018-19, under the PMUY the average per capita consumption is 3 cylinders. This has brought about a positive change in the lives of these households which were long dependent on the traditional polluting cooking fuels and methods. LPG Panchayats are being organized to promote learning through peer group interaction – Kuch Seekhein, Kuch Sikhayein. Apart from experience sharing, they also aim at the safe and sustained usage of LPG. In FY 2018-19, OMCs have conducted over 1 lakh LPG Panchayats and safety clinics pan India for bringing about awareness as well as educating PMUY beneficiaries to optimize LPG usage. As on 01.08.2019, there are nearly 24,000 LPG distributorships on industry basis. To make LPG affordable to poor families, OMCs have introduced 5 Kg refill option to Ujjwala beneficiaries where in Ujjwala beneficiary can swap 14.2 Kg cylinder with 5 Kg refill and vice versa. 2.26 lakhs beneficiaries have taken advantage of this scheme as on 01.09.2019. OMCs have also given loan recovery deferment upto six refills or one year w.e.f.01.04.18 for the PMUY beneficiaries who have availed loan facility for hotplate or first refill or both. The facility has also been extended w.e.f. 01.08.2019. PMUY implementation has been appreciated by the World Health Organization (WHO) which has termed it a decisive intervention to check indoor health pollution being faced by the women of the country. Internationally acclaimed, PMUY is often described as the ‘blue flame’ revolution. PMUY has been hailed by international organizations and developed countries while it has set an example for the developing countries of the world.