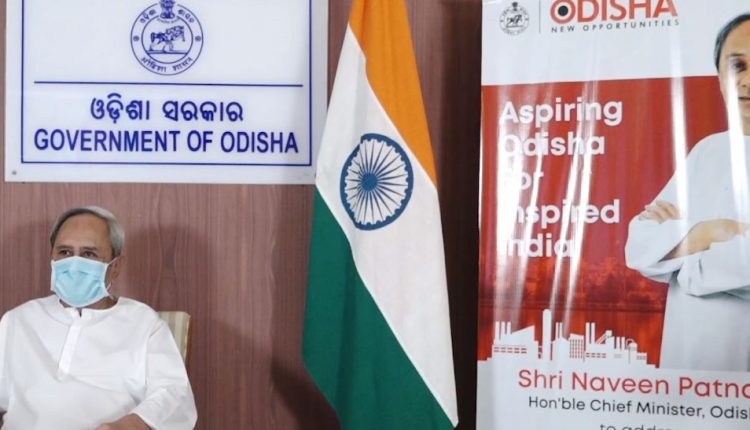 Bhubaneswar  :  Highlighting Odisha’s industrial ecosystem and growth in the last two decades, Chief Minister Shri Naveen Patnaik today said that Odisha is set to achieve its cherished goal of becoming a world-class industrial destination. He sought the continuous cooperation of FICCI in realising this goal. The Chief Minister was addressing the 93rd Annual general meeting of Federation of Indian Chambers of Commerce & Industry (FICCI) on virtual platform that had a special session with the theme ‘Aspiring Odisha for Inspiring India’.
He requested the FICCI to nominate dedicated sectoral teams to work with respective departments in the Government of Odisha especially in important sectors such as Food Processing, Chemical, Tourism and IT.
The Chief Minister appreciated FICCI’s partnership in multi-dimensional progress spanning across investment promotion, policy advocacy, and promoting entrepreneurship, especially among women and start-ups. He said that with over 90 years of history, FICCI has been doing a remarkable job in industrial development of India.
Proclaiming that Odisha is fast emerging as the ‘Manufacturing Hub of Eastern India’, he said that his Government has always endeavoured for a holistic business environment for the investors in Odisha.
Emphasising the effective governance mechanism of the state, he said that Odisha is implementing path breaking technological reforms to reduce physical interface for availing Government services. The transformational initiatives under ‘5T’ charter and ‘MO SARKAR’ have played a major role in creating a conducive business environment in the State by inculcating professionalism and behavioural change in the State Government agencies, he added.

He informed that the State Government has developed end-to-end online systems for over 30 Government to Business services to reduce regulatory burden on industries. Timelines for the services have also been included under the State’s Right to Public Services Act for prompt service delivery, he added. The State has also developed a dedicated land bank with over one lakh acres of land available on a GIS-based platform for easy site selection by industries, he further added.
Saying that Odisha was ranked number 1 in terms of attracting investments during April-September 2019, and is poised to continue this leadership position, he expressed happiness over the encouraging investor sentiment towards Odisha.
He informed that even during these difficult COVID pandemic times, Odisha has been able to attract new investments of over Rs.1 lakh crore across multiple sectors.
Not only new investments, he said, but Odisha is also focussed on grounding the projects. In the recent past, new industrial projects were launched in diverse sectors ranging from Healthcare, renewable energy, Downstream to Steel & Aluminium, IT and Food processing, he added.
He said that Odisha is targeting specific focus sectors including the ancillary and downstream to metal sector. We are working towards further value addition in major industrial regions such as Angul and Jharsuguda for aluminium downstream and Kalingnagar for steel downstream, he added. Further, Paradeep is being developed as the hub for chemicals and petrochemical industries, he said.
Appreciating FICCI’s role in the success of the second edition of Make in Odisha Conclave, he asked for similar support for the third edition.
CongratulatING the FICCI team for the 93rd AGM, he extended good wishes for all future initiatives including collaboration with Odisha.
The session started with the welcome address by Dr Sangita Reddy, President, FICCI, MD, Apollo Hospitals, who spoke about the investor-friendly industrial climate of Odisha.
This was followed by a video presentation on how the state of Odisha, under the able leadership of Chief Minister transformed the state into an industrial powerhouse within two decades and how in spite of economic slowdown due to COVID-19, Odisha could get very high levels of investment in this period.
Industry leaders Mr Harsh Pati Singhania, MD, JK Paper Limited and Mr Sandip Somany, MD, HSIL were all praised the CM Odisha for his visionary leadership and shared their experiences about robust industrial facilitation in Odisha and the support from the state government for the investments in Odisha.
Chief Secretary, Development Commissioner, Agriculture Production Commissioner, Industries Deptt principal Secretary, CMD IDCO, MD IPICOl among other officers of the state government attended.

Chief Secretary directed to expedite the process of recruitment and appointment