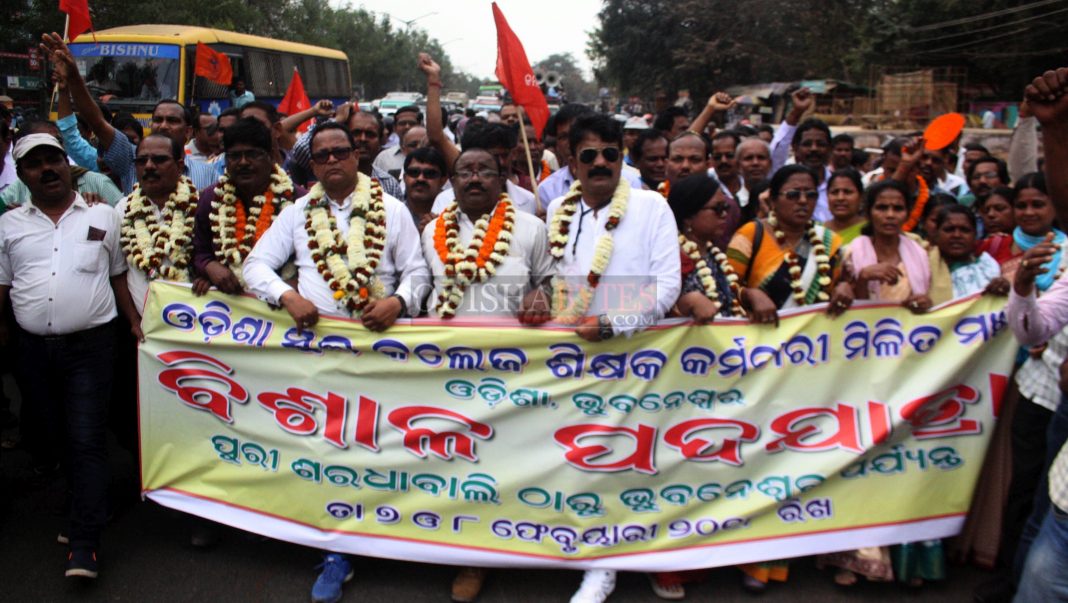 Bhubaneswar: Taking strong exception to the alleged arm-twisting tactics of the Odisha government which has laid conditions asking teachers and staff of all private schools and colleges to compulsorily submit personal affidavit to be eligible for revised grant-in-aid (GIA) salary, the Odisha School College Sikshak Karmachari Milita Manch took out a huge protest rally from Puri on Wednesday.
The rally, which began from Sri Gundicha temple, had a night halt at Pipili. It will reach the state capital on Thursday where around 60,000 teachers and staffers will join and stage dharna by blocking the Mahatma Gandhi Marg.
Condemning the conditions laid out by the state government for GIA schools and colleges, Manch leader Pabitra Mahala said the chief minister after 17 days of strike by the Manch last year had announced a policy for these educational institutions.
“Just to show the Supreme Court that the government is keen on meeting the long-standing demands of the teachers and staff of these GIA schools and colleges, the government came up with a notification on October 22, 2017. However, upon going through the notification, it has been found that the government has laid mandatory provision for all teachers and staff of GIA schools and colleges, asking them to submit a personal affidavit with a pledge that they would withdraw all cases against the state government and never file any case in future so that they would be eligible for the revised salary. This is grossly undemocratic and the Manch would stage indefinite protests till the government has not withdrawn such contentious and arbitrary provisions,” Mahala said.
Expressing resentment, an agitating teacher said the state government’s condition is like feeding a man with his hands tied.
The Manch threatened to boycott the Annual High School Certificate (HSC) and Plus Two examinations and campaign against the ruling BJD in the ensuing byelection to Bijepur assembly constituency if the state government failed to meet its demand in a couple of days.
Asked about the demands of the Manch, Higher Education minister Ananta Das said the government is ready for a meeting with the Manch to sort out its demands. He urged the Manch to withdraw the stir.