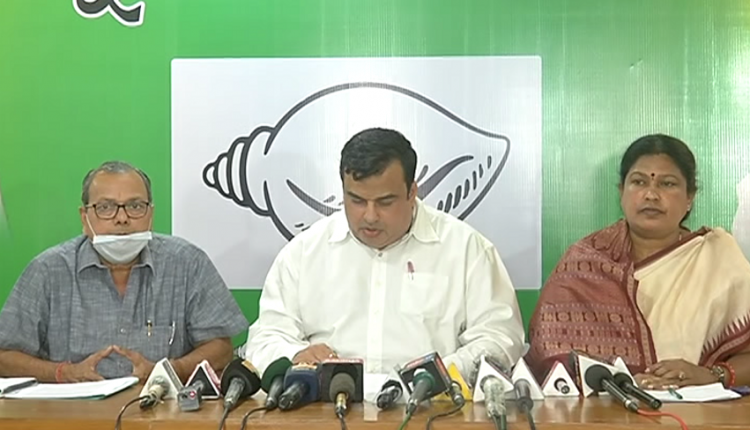 Bhubaneswar : A press meet was held this afternoon at the Biju Janata Dal Party office in Bhubaneswar
which was addressed by senior leaders of BJD, MLA Shri. Rohit Pujari, MLA Smt. SnehanginiChhuria and MLA Shri. Rajendra Dholakia. In the press meet the following points were raised by the members present.
During the challenging times of COVID, the farmers of Odisha displayed remarkable resilience and commitment and have produced a bumper crop production for 2020-21. We salute the efforts of the Odisha farmers and thank the Hon’ble CM Shri. Naveen Patnaik for his support and leadership which has enabled bumper crop production in Odisha despite the COVID challenges. The BJD Government under the leadership of Hon’ble CM Shri. Naveen Patnaik has always worked for the interests and development of farmers and the farming community. In the past years, Odisha has doubled farmers income and increased crop production to become one of the top four contributors of rice to India’s Public Distribution System. However, the policies and practices of the BJP-led Union Government are becoming a major problem for the farmers of Odisha. Recently, the Centre sent a letter stating that they would limit the lifting of parboiled rice to the extent of 50% of the original estimates and would not accept any surplus Parboiled rice during Rabi season 2020-21. This anti-farmer decision by the Centre will severely affect the farmers of Odisha. In Kharif 2019-20, 53.31 Lakh Metric Tonnes (LMT) Paddy was procured and in Rabi 2019-20, 17.25 LMT of Paddy was procured, totaling 71 LMT. Out of this, 48 LMT rice was obtained. From this 48 LMT rice, 24 LMT was consumed by Odisha while 17 LMT was procured by Food Corporation of India (FCI) for the Centre and 7 lakhs were used in the PMGKAY programme.
In 2020-21, 35.49 LMT Paddy has been procured and about 30 LMT more would be procured totaling 65 LMT of Paddy procurement for Kharif season. In Rabi, about 17 LMT would be procured, totaling 82 LMT of Paddy procurement for 2020-21. Out of this, 82 LMT Paddy about 55 LMT Rice would be obtained and almost all of it would be parboiled rice. Out of this 55 LMT rice, 24 LMT would be consumed in Odisha, about 10 LMT as per the recent letter from Centre would be procured by FCI and the rest 21 LMT rice worth about Rs. 7350 crores would not be lifted/evacuated by the Centre. This would adversely burden Odisha and especially the farmers. We demand that the Centre withdrawal this anti-farmer policy of restricting lifting/evacuation of rice from Odisha and lift the total surplus rice of 31 LMT from Odisha.
The Odisha State Civil Supplies Corporation Ltd. (OSCSC) procures paddy in the State and pays the Minimum Support Price (MSP) of Paddy to the farmers by taking loans and in this season has already paid Rs.6550 Crores to the farmers. The Centre pays the advance subsidy amount in the first month of every quarter and presently about Rs. 6040 crores of subsidy amount payable to Odisha is pending with the Centre. This huge outstanding amount is putting a severe financial burden on Odisha but the Centre is unmindful of this. Instead of the BJP leaders in Odisha shedding crocodile tears about farmers, they should raise their voices with their partyruled Union Government and get the outstanding amount of Rs. 6040 crores released to Odisha. If they are able to do it, we would appreciate them and if they are unable to do it, then their crocodile tears would be exposed before the farmers of Odisha.
The Biju Janata Dal has always been fighting for the rights and development of farmers in Odisha. We have been demanding that Swaminathan Committe report be implemented and the MSP be doubled. It was resolved in the Odisha Assembly that the MSP should be increased to Rs. 2930 per quintal but the Centre continues to deny it. The BJD will continue its fight for the farmers of Odisha and till the rightful demands are not met.
After Hon’ble CM Shri. Naveen Patnaik inaugurated the mega lift irrigation project in Kalahandi and unveiled other steps to boost agriculture productivity in Western Odisha last week, a desperate BJP is worried by the growing popularity of Hon’ble CM’s pro-farmer policies and is therefore organizing this protest on January 21 only for political reasons. But they will not succeed in their goal. People of Odisha and especially the farmers know that while BJD stands for and with the farmers, BJP stands against the farmers and farmer interests.
If within the next seven days, the demand for lifting the 31 Lakh MT of mostly parboiled rice for 2020-21 is not accepted by Centre/FCI, and the outstanding Rs.6040 crores of subsidy amount is not paid to Odisha, the farmers of Odisha will then descend on the streets of the State and at that time, Biju Janata Dal will support and stand with the farmers of the State.  We hope better sense prevails in the BJP and instead of shedding crocodile tears and raising their voice in Odisha, they would raise their voice against this injustice meted out to Odisha farmers and try to ensure that the Rs.6040 crore subsidy amount is provided to Odisha at the earliest and 31 Lakh MT parboiled rice from 2020-21 year is lifted/evacuated by the Centre/FCI.