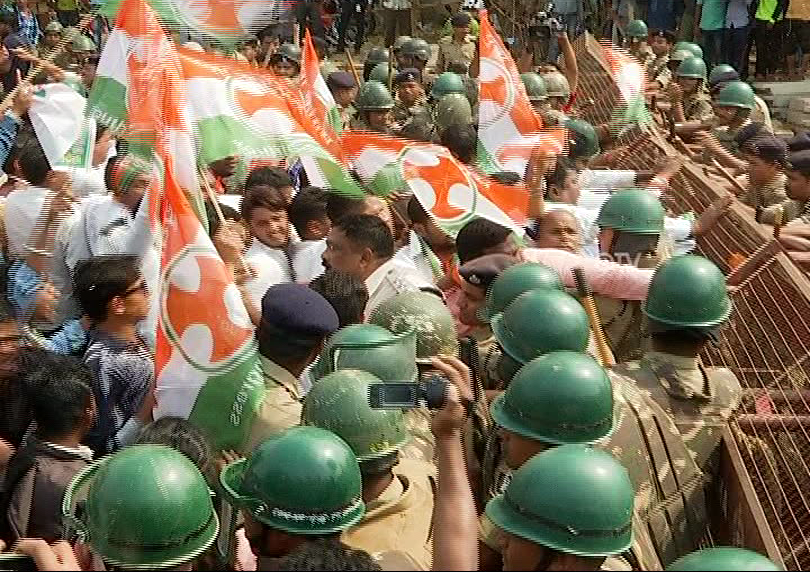 Bhubaneswar: A scuffle occurred between Congress workers and police during a ‘Naveen Niwas’ programme of the party here today.
The Congress members and police personnel engaged in a scuffle when the agitators tried to march towards Naveen Niwas, the residence of Chief Minister Naveen Patnaik, at the Sishu Bhavan Square.
The protestors led by Pradesh Congress Committee president Prasad Harichandan, former Nabarangpur MP Pradip Majhi started their protest rally from the Congress Bhavan near Master Canteen Square. When they reached Sishu Bhavan Square on their way to the CM’s residence, police intercepted them and scuffle ensued. The protestors also threw eggs at the police.
The Congress is demanding resignation of Patnaik for his alleged failure in ensuring justice to the minor tribal girl who committed suicide on January 22 after being denied justice. She alleged that she was raped by four security personnel in a forest in Kunduli in Koraput district on October 10 last year.
“Naveen Babu has completely failed to give protection and ensure safety to the women fraternity in the State and the Kunduli girl in particular. He has no right to continue as the Chief Minister of Odisha. He should step down,” said Harichandan.
Meanwhile, Chief Minister Naveen Patnaik on Wednesday ordered High Court-monitored Special Investigation Team (SIT) probe into the Kunduli case. Two separate probes by State Crime Branch and judicial Commission are also going on in the case.