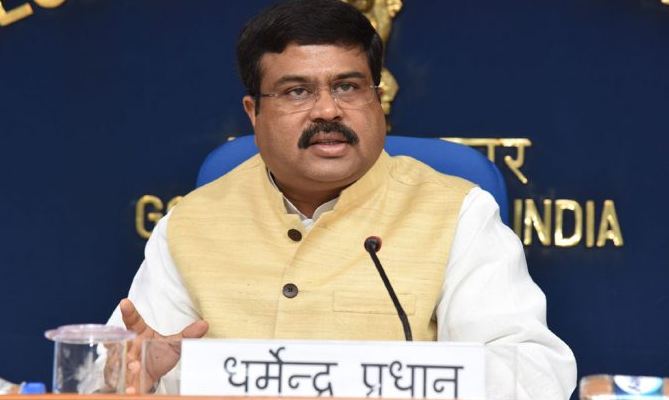 New Delhi : Union Minister of Petroleum and Natural Gas & Steel Shri Dharmendra Pradhan today presided over a virtual ceremony in which a number of initiatives were launched to provide major fillip to the SATAT initiative, and help India leap ahead towards a greener tomorrow.

This included signing of a Cooperation Agreement by Oil and Gas majors including IndianOil, HPCL, BPCL, GAIL and IGL, for the promotion and development of the SATAT (Sustainable Alternative Towards Affordable Transportation) scheme. The SATAT scheme aims to set up Compressed Bio-Gas production plants and make CBG available in the market for use as a green fuel.’SATAT’, launched on 1.10.2018, envisages to target production of 15 MMT of CBG from 5000 plants by 2023.Besides the potential to boost availability of more affordable transport fuels, better use of agricultural residue, cattle dung and municipal solid waste, the 5000 CBG plants will provide an investment of 1.75 lakh crore, an additional revenue source to farmers, and 75,000 direct job opportunities and lakhs of indirect jobs.

CBG plants and Retail Outlets dedicated to the nation

The Cooperation agreement provides for establishing a strong network for marketing the entire produced quantity of CBG Plants through various channels. The agreement also has provision for associate implementers to join the SATAT movement. As per the agreement, IndianOil shall act as coordinator under the SATAT scheme and liaison with the Government and other agencies on behalf of Industry members. GAIL shall serve as the coordinator for the implementation of the CBG-CGD synchronization scheme.

During the landmark event, Union Petroleum Minister also inaugurated the first injection of CBG into the CGD pipeline network at Govardhannathji Energies into Gujarat Gas CGD network at NadiadKhedaDistt., Gujarat. This is in line with the recently issued policy guidelines by the Ministry of Petroleum & Natural Gas on CBG injection in the CGD network.

A website to provide a digital boost to the SATAT programme was also unveiled during the event. The website www.satat.co.in shall be a resource centre for new and existing CBG Plants providing details on CBG & SATAT, enablers under the SATAT scheme and FAQs. The portal also contains a section on the learning modules where handy presentations and videos have been made accessible.

Speaking on occasion, Union Petroleum Minister Shri Dharmendra Pradhan said that the Government of India is committed to harnessing the full potential of biofuels to realize the Hon’ble Prime Minister’s vision of reducing import dependence and ensuring a sustainable energy future for the nation. He said that steps taken by India for containing the global warming as per the commitment made in COP-21 have been well appreciated. These included providing LPG connections to 8 crore people, surge in the Ethanol blending to almost 9% in the current Sugar year, progress in Bio-diesel programme, Aluminium Air battery.

Shri Pradhan said that the CBG programme under the SATAT has gained momentum, but the growth has to be exponential, not incremental. He said that this requires Oil and Gas PSUs to play more responsible role, debottlenecking, setting up of infrastructure, handholding of small entrepreneurs, and convincing the big companies to set up mega-clusters for the CBG. The Minister said that India should play a global leadership role in energy conversion, as we convert agro-residues/municipal wastes and other green wastes into energy, and make the farmers and rag-pickers important stakeholders in the process. He said that this will help in reducing oil imports, improving environment, saving foreign exchange, enriching our poor, and also brand building.  The Minister said that there is a large potential of harnessing usable Hydrogen from CBG in an economically-viable manner.

Speaking on occasion, Secretary Petroleum Shri TarunKapoor said that the agreement among Govt PSUs will inspire confidence among the entrepreneurs putting up CBG plants, and remove doubts about the marketing responsibility of gas from these plants. He said that injection of CBG into the CGD pipeline network is an important milestone. He said that the Government is in discussion with the state governments to sort out various issues concerning these plants, and also with the Fertilizer department for the marketing of manure produced in these plants. Shri Kapoor called for quick installation of SATAT plants.