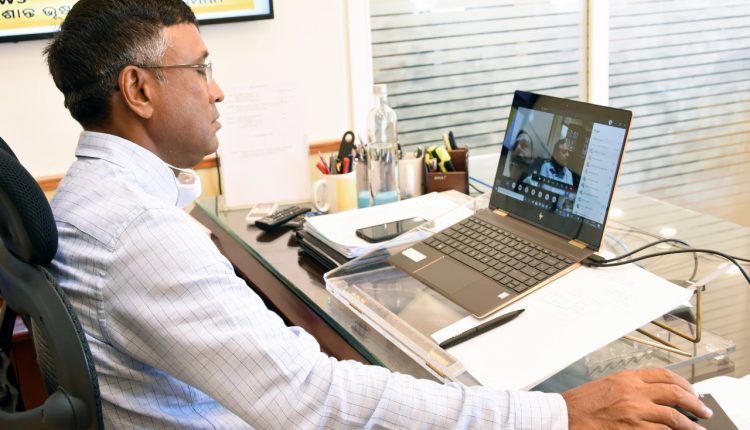 Bhubaneswar :  In another significant step towards ‘ease of doing business’ in Odisha, Chief Secretary Sri Asit Tripathy has directed to make the State Pollution Control Board (SPCB) more be vibrant and facilitating through ‘process reengineering’ without compromising the environmental concerns. He gave this direction while presiding over the Board meeting of SPCB held over digital mode from Lokseva Bhawan today.

Sri Tripathy tasked the Board to come up with definite action plan for setting national benchmark in ‘hassle free compliance’ through simplification of the processes and office automation. He said, Since Odisha is rich in mineral resources, the State also needs to be proportionately industrialized”. “Process reengineering while adding to capacity enhancement of the Board”, added Sri Tripathy, “will help creation of more employment opportunities through facilitation of business environment”. Chief Secretary set transformational goals for the Board to reduce the time line for ‘delivery of public services’ and reverse the increasing trend of air pollution by guiding the industries to adopt latest ‘production technology’ and ‘containment measures’.

Reviewing activities of the Board presented by Member Secretary Dr K. Murugesan, Chief Secretary Sri Tripathy directed to simplify and shorten the application forms for availing certificates/ no objections under various norms. The board was also directed to reduce the file processing and disposal times by adopting office automation system. Member Secretary Dr. Murgesan said that the automation system should be linked to regional offices and central laboratory to reduce the time of getting reports from field officers. Chief Secretary Sri Tripathy directed to reduce the time period specified for delivery of different public services under the Board. The board would adopt ‘self attestation” mode by eliminating physical contact with the application.

Further, Sri Tripathy directed to establish continuous air quality monitoring stations (CAAQMS) in air pollution prone cities. Dr Murugesan’s proposal to set up the satiations at pollution prone places in the districts of Cuttack, Balasore, Keonjhar, Sundargarh, Mayurbhanj, Angul and Bhubaneswar was approved in the meeting. At present two CAAQMS are operating at Talcher and Brajrajnagar. Chief Secretary directed to complete the work within the current financial year. It was decided to put in place a SOP for rigorous validation and analysis of the large volume of raw data expected to be generated from these stations for public use.

The proposal regarding development of geo-data base for environmental mapping was approved in the meeting. It was decided that it would be a web based application for all polluted prone areas of Odisha. The meeting also decided to develop a web portal containing updated data about air and water quality in different areas of the State for public information and use.

Chief Secretary Sri Tripathy directed the Member Secretary to have weekly monitoring of the process simplification, reengineering and office automation. He directed to accomplish major part of the task within a month.

All members of the Board along with senior officers of the concerned wings of the department participated the deliberations.