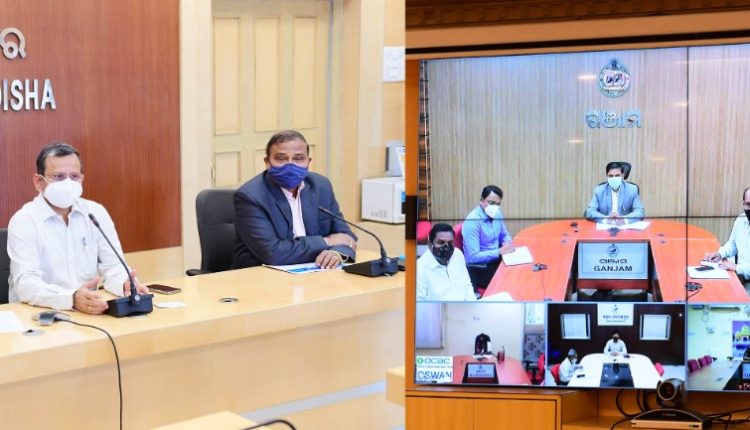 Bhubaneswar :  Chief Secretary Sri Suresh Chandra Mohapatra sensitized the Collectors and ULBs on Hon’ble Chief Ministers Cleanest City Award over a video conferencing from Lokseba Bhawan today. Sri Mohapatra said, “The institution of the award is an innovative initiative by Hon’ble Chief Minister for creating healthy competition among the ULBs on their march towards a clean and livable city. He added, “Solid waste management through micro composting centers (MCCs) is a standardized end to end solution from ‘segregation at the source’ to the ‘door to door collection’, composting and disposal. It is a sustainable waste management technique, which while reducing the burdens of dumping on the land, also lessens the carbon footprints in the urban vicinity”. Sri Mohapatra asked the Collectors to make the initiative “a mass movement through intensive awareness, behavior change education and active involvement of the people”.

Further, Chief Secretary directed the ULBs to involve the members of the Mission Shakti and Transgender groups in operation and management of the MCCs. The ULBs were directed to identify all rag pickers and involve them in the works of MCCs, material recovery facilities (MRFs) so that they could earn their living from it.  Sri Mohapatra also directed to improve bus stands, parking places and open areas in each ULB.

Principal Secretary Housing & Urban Development Sri G. Mathivathanan outlined the minimum eligibility criteria for the ULBs to get entry for the CM’s cleanest city award competition.  He said, “City cleanliness parameters will be dynamic and would change from time to time with changing situation. The focus for current quarter of the year is on solid waste management and visible cleanliness”.  He clarified that the minimum eligibility criteria for an ULB to participate in the competition would be engagement of the members of mission shakti in operation and management of the MCCS;  enumeration and issue of identity cards to rag pickers; essential operational equipments at the wealth centers, availability of identified place for building wastes, monthly organization of bada khana with sanitation workers, community partners and households, recognition to the best performing sanitation workers, twice a day sweeping, and, night sweeping in all public and commercial areas.

Director Municipal Administration Sri Sangramjit Nayak informed that ULBs should upload the data along five thematic areas like creation of infrastructure, service level performance, citizen satisfaction, operational efficiency, financial performance particularly composting and selling, and, institutional capacity. The assessment would be done on the basis of information collected from different sources like Swachh Sahara portal, Ama Sahara mobile app, Mo Sarkar feedback, and , direct filed observation by a professionalized third party agency. Sri Nayak added that 20th of each month would be known as Swachhata Charcha Divas on which all the stake holders in each ULBs would sit together to deliberate the issues relating to urban health and sanitation in that ULB.

Additional Secretary Sri Kalayan Kumar Ratha along with senior officers of the department joined the meeting. The Collectors and Executive Officers of all 114 ULBs participated in the discussions through VC.