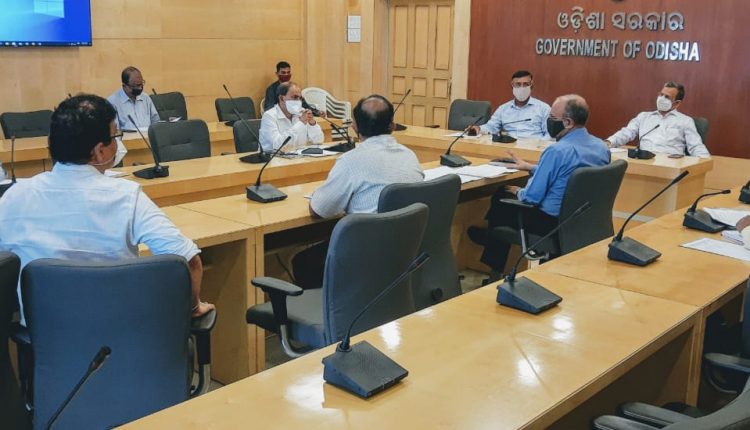 Bhubaneswar :  In another step towards expediting employment intensive projects in construction and infrastructure sector, Government has started streamlining the minor mineral operations in the State.  Reviewing the progress made so far in a high level meeting held in Lokseba Bhawan Conference hall recently, Chief Secretary Sri Asit Tripathy directed the revenue and disaster management department to identify and operationalize the new sairat sources for filling the gap between ‘demand and supply’ of minor minerals. Sri Tripathy said,” Enhancement of legally operational sources will have triple benefit of ensuring supply of material for construction sector which is quite labour intensive, containing the theft of minor minerals and increasing the collection of revenue”.

Principal Secretary Revenue & Disaster Management Sri Bishnupada Sethi appraised that as per earlier decisions of Government, the Directorate of Minor Minerals have been made functional within a very short period of time. Within last couple of months 1129 new sairat sources have been identified in different districts. With this, the total number of minor mineral sairats have increased to 4965.

Chief Secretary Sri Tripathy directed to identify sand rich river beds on banks of the major rivers like Mahanadi, Baitarani, Bramhani, Rusikulya, Subarnarekha in cooperation with the department of Water Resources, Forest & Environment; and, prepare scientific plans for sand mining. It was decided to allow inter-state transportation of sands through competitive bidding process.  Sri Tripathy further directed to strengthen the enforcement activities for checking the theft of minor minerals. The Collectors and Police Superintendents were directed to utilize the services of Odisha Industrial Security Force (OISF) and sharpen the squad activities for containment of illegal lifting of the minerals. Sri Tripathy directed to deal very strongly against the illegal minors and transporters.

Director Minor Minerals Sri Bubhuti Bhusan Das appraised that “revenue to the tune of around Rs.37.11 cr has been collected during the months of April and May this fiscal from minor minerals. The process for preparation of mining plan, availing of environmental clearance and timely completion of bidding process for another 1469 sairats have been brought to an advanced stage”.  Chief Secretary Sri Tripathy directed to scale up annual revenue generation to Rs.1000 cr  from minor minerals.

Available data show, in the first phase, ten sections of OISF have been provided for 10 locations under 08 important districts from the view points of minor minerals. The forces will be utilized in squads for prevention and apprehending of the illegal minors and transporters. The approved locations for deployment OISF include Cuttack Sadar, Baranga, Jaleswar, Anandapur, Chhtrapur, Bhanjanagar, Dharmasala, Tangi and Ranapur. Besides, one section has been deployed for Jharsuguda, Lakahanpur, Brajarajnagar on rotation basis. Chief Secretary Sri Tripathy directed that the deployed police team couldbe moved to any other Tahasil or Sub-division for prevention of illegal lifting of minor minerals.