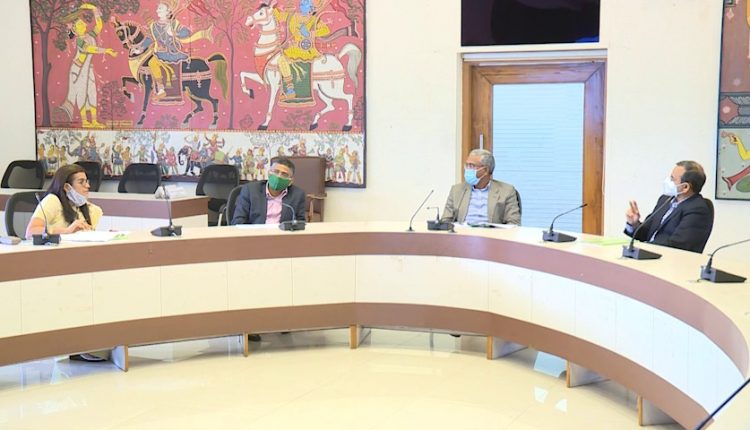 Bhubaneswar : The projects under Odisha Mineral Bearing Areas Development Corporation (OMBADC) being implemented through various departments have been put on fast track with Chief Secretary Sri Asit Tripathy taking a review of the projects and setting time line for completion against each one in a high level meeting held in Lokseba Bhawan Conference hall today, wherein Chief Executive Officer ( CEO) of OMDAC Smt Uma Nanduri outlined the issues for discussion.

Secretary Skill Development and Technical Education Sri Sanjay Kumar Singh appraised, “The projects for modernization of Government ITIs and Engineering schools along with skill development of tribal youths have been taken up under OMBADC funding”. The specific activities include placement linked training programme for 1200 tribal youths estimated around Rs.8.80 cr , construction of 4 hostels and 2 skill development centers estimated around Rs.8.05 cr and pre-recruitment training camps in 4 OMBADC districts estimated around Rs.0.97 cr”. So far, 243 youths have been completed the training and out of them 132 have been placed in different sectors like plastic processing, electrical , housekeeping, food & beverage , sewing machine, beauty therapy, retail and general assistance.  Another 267 youths are undergoing training. The construction of 2 hostels (one for boy’s and one for girl’s) has progressed up to roof level in Mayurbhanj district. Similarly, construction of one boy’s and one girl’s hostel in Jajapur district have been expedited.  Further Secretary Sri Singh appraised that modernization of 4 ITIs namely Govt. ITI Rourkela, UGIE Rourkela, OSME Keonjhar and Govt ITI Barbil have been taken up with estimated cost of Rs.47.40 cr.